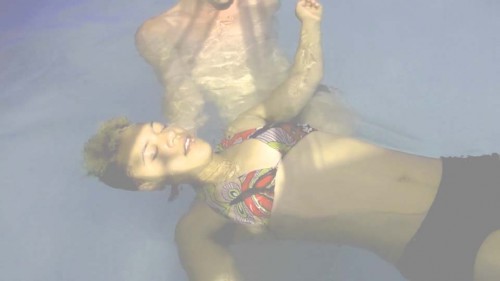 The idea came 6 years ago during the Fusion Theater Festival, while I was finishing up my sessions. I was already pretty exhausted as the swiss crew spotted the pool and asked, if I could give them all a Watsu® session (12 people). My first reaction was: no chance, but somehow they managed to talk me into it, offering all kinds of help around the pool. I was suddenly 120% supported, receiving the best catering, extra dry towels and the help taking the pool down in the end. I just had to grab the next body. Others took care of them right away after the session. This allowed a more or less non stop flow of short sessions with very little breaks. I was falling into a kind of trance. It became easier to read the bodies, while it was not necessary to take care of any other issues, such as a fixed timing, pool-technics and so on. The people are only 15 to 20 min in the water but the result is as though they would have had a full 45 minute session. The friends were watching each others sessions. I saw them being emotionally moved while, standing on the sides of the pool and looking at how the face expression of their friend would change. People relaxing in and under the water look very beautiful.

Since then, I kept going with this format.